The Latest: Body found in city park in Salina

Police on the south end of Sunset Park Tuesday

Salina Police currently are conducting a death investigation after the body of a 67-year-old male was found in Sunset Park Tuesday afternoon.

"We are not looking for any suspects and the public is not in any danger," Salina Police Captain Paul Forrester said this morning.

According to Forrester, the man was not a Salina resident.

Police were called to Sunset Park, 700 Sunset Drive, at 2:20 p.m. Tuesday after a park employee found the man, Forrester said. Park employees told police that the man had been sitting in the park for a couple of hours, Forrester said.

An area at the south end of the park, near the water tower, was cordoned off, and for a brief time, police had park entrances blocked.

No other information was released as the investigation is continuing.

Salina Police have closed Sunset Park, 700 Sunset Drive, after a body was found there.

Shortly before 2:30 p.m. Tuesday, emergency personnel were dispatched to Sunset Park off of West Republic Avenue for the report of a body found in a vehicle. Crime scene tape can be seen blocking off an area at the south end of the park near the water tower.

Check the Post for additional details as they become available. 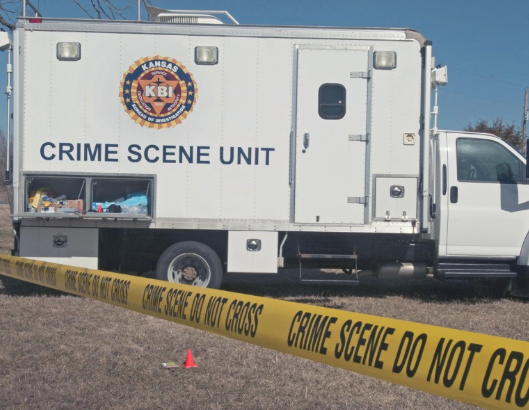 RUSH COUNTY – The Kansas Bureau of Investigation has identified the man injured in an officer involved shooting yesterday in Rush County as 42-year-old Timothy W. Kellebrew from Ashland City, Tenn. Kellebrew continues to recover in a Wichita hospital, and is currently in fair condition, according to a media release.

The investigation is ongoing. Nothing further will be released at this time.

RUSH COUNTY – The Kansas Bureau of Investigation is investigating an officer involved shooting which occurred Tuesday morning along Highway 96 in Rush County.

At approximately 9:30 a.m., a Dollar General store in Dighton was robbed at gunpoint. A Ness County Sheriff’s deputy observed a blue Dodge Ram pickup matching the description of the vehicle used in the earlier armed robbery and attempted to stop it east of Ness City along Highway 96. The male driver of the vehicle refused to stop, and a pursuit began.

Preliminary information indicates that the deputy pursued the Dodge Ram heading east along Highway 96 into Rush County. Rush County Sheriff’s deputies then deployed stop sticks, which flattened two tires on the vehicle. The driver continued traveling for several additional miles, but before his vehicle came to a complete stop, he forced a nearby pickup truck with a cattle trailer off the road. The man then exited the Dodge Ram with a handgun, and attempted to carjack the bystander’s pickup truck. As this was occurring, the Ness County Sheriff’s deputy fired multiple shots, and the subject was struck. The shooting occurred at approximately 10:40 a.m.

EMS responded to the scene and the man was flown to Wesley Medical Center in Wichita. He underwent surgery and is expected to survive. Authorities are still working to confirm the man’s identity. A female passenger in the Dodge Ram was detained and questioned about the incident.

The KBI will conduct a thorough and independent investigation into the shooting. Once completed the findings will be turned over to the Rush County Attorney for review. This investigation is ongoing. No further information will be released at this time.

The shooting occurred following a vehicle pursuit by the Ness County Sheriff’s Office.

No sheriff’s deputies were hurt. One  subject was injured and was transported to the hospital. His condition is unknown at this time.

KBI agents and a crime scene response team have responded.