Last weekend an arrestee was booked into the Reno County Correctional facility for felony drug distribution charges. Initial screening of the inmate indicated siblings in the household were positive. Upon further investigation by arresting Deputies the 911 Dispatch Center in the jurisdiction he/she resided in was contacted, early morning hours the Health Dept was not open. The inmate’s address or siblings’ names were not confirmed as being positive or being tracked by that agency at the time.

At this time, we believe all persons which have had direct contact with this individual have been identified and put on notice for isolation and testing.

The health and welfare of our employees and the inmates in our custody are of the utmost importance and priority. 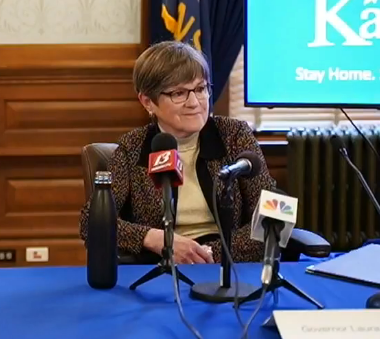 TOPEKA —The Department for Children and Families in collaboration with the Kansas State Department of Education (KSDE) announced this week the creation of the Pandemic Electronic Benefit Program (P-EBT). The program will help families who have been impacted by school closures due to COVID-19 to purchase food for their children.

“We know the pandemic has made it difficult for families to access food, especially if they relied on school meals,” Governor Laura Kelly said. “Thanks to the partnership between DCF and KSDE the state will be able to automatically enroll most families into the P-EBT program, so they receive their benefit as quickly as possible.”

“Food insecurity should be the last thing our Kansas children should have to face right now,” Cheryl Johnson KSDE director of child nutrition and wellness said. “P-EBT provides temporary funding to address emergency food needs and avert financial hardship for families affected by the pandemic. I am thankful that through this partnership, Kansas is able to put healthy food on the table for Kansas children.”

P-EBT provides a one-time benefit of up to $291 on a Kansas Benefits Card to Kansas families whose children between the age of 5 to 18 would receive free or reduced-price meals at participating schools. There is no application process to receive the P-EBT benefit.

DCF will issue the benefit in phases. Those Kansas families who currently receive free or reduced-price meals and are enrolled in the food assistance or TANF programs should begin to receive their benefit later this week.

The second phase also will include an automatic match with those families on free or reduced-price meals and who also are receiving Medicaid or child care assistance.

The final phase will include families that need to provide additional information to receive the benefit. Those families will receive access to a parent portal to register for the program beginning June 5. Parents should receive information from their school district on how to access the parent portal.

“Most families should expect to see their benefit in the next two weeks,” DCF Secretary Laura Howard said. “If families have not yet received information about P-EBT, I encourage them to reach out to their local school district.”

In order to provide additional information about P-EBT and to answer questions, DCF is hosting a virtual town hall meeting tomorrow from 11 a.m. to noon.

Use this link to join: https://bit.ly/KansasP-EBTTownHall