Residents urged to flush only toilet paper into sewer system

HUTCHINSON, Kan. — With the COVID-19 virus causing shortages in various items, including toilet paper, Hutchinson Public Works is strongly urging people to not dispose of anything other than toilet paper into the sanitary sewer system.

Such things like paper towels, tissue and even flushable wipes in large quantities can harm your sewer system. Richard Buller with Public Works says any type of root intrusion in your system will catch these materials and could quickly back up your sewer. If the problem is farther down the line, it could cause problems for a number of homes around you.

Buller again stressed to residents to only flush toilet paper down their systems. 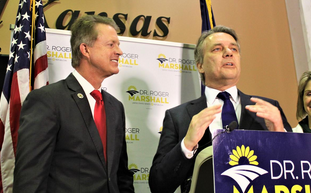 Kan. GOP wonders who can defend Senate seat it's taken for granted

TOPEKA — A Democrat hasn’t won a U.S. Senate race in Kansas since the early days of the Great Depression.

It took that economic crisis to propel George McGill, riding on Franklin Roosevelt’s New Deal coattails, to a win. And he served but a single term.

This year, the country finds itself on the cusp of another economic calamity. The COVID-19 epidemic sent the stock market into convulsions, forced all range of business and campaigning into hibernation and put life in limbo.

If the virus continues to escalate across the country, and through Kansas, that might even jeopardize how people in the state vote and how candidates might influence them.

What’s more, the man Republicans thought could most easily hold the U.S. Senate seat that incumbent Pat Roberts is walking away from has, finally, said he’s not interested.

That has the GOP bracing for a bruising primary anchored within its conservative wing — and debating who would run the greatest risk of losing a seat the party’s long been able to take for granted.

Democrats, in turn, see at least a slugger’s chance of sending one of their own.

Yet if an anti-Trump wave builds in the state’s suburban population centers, he said, “Democrats want to have a candidate that can take advantage of it.”

In 2016, Trump won Kansas by 21 percentage points over Democrat Hillary Clinton. But several polls taken in the last two years and the election of Democrats to Congress and the governor’s office in 2018 suggest that a political shift is possible.

The biggest factor could be who Republicans choose to take on likely Democratic nominee Barbara Bollier, a state senator from vote-rich Johnson County. She defected from the Republican Party just last year.

Republican leaders had pinned their hopes on U.S. Secretary of State Mike Pompeo. He represented Wichita in the U.S. House before joining Trump’s cabinet. But after equivocating for months, he decided not to run.

That, according to early polls, left former Kansas Secretary of State Kris Kobach as the frontrunner. That’s got some Republicans nervous.

Their anxiety stems from Kobach’s loss to Democrat Laura Kelly in the 2018 governor’s race.

Joanna Rodriguez, a spokesperson for the National Republican Senatorial Committee, told Politico in July that a Kobach nomination would put the party’s “Senate majority at risk.”

U.S. Rep. Roger Marshall from western Kansas seizes on those concerns to advance his bid for the nomination.

“It shows us winning by 10 or 20 points while other people in this (primary) race would be in jeopardy of losing,” Marshall said.

Referring to Kobach’s 2018 loss, Marshall asks, “how does a Republican lose a governor’s race in a state that President Trump carried by double digits?”

Republicans at the very top of the party share his concerns, Marshall said. He said the issue of Kobach’s candidacy had come up in meetings with Senate Majority Mitch McConnell and President Trump.

“I always try to keep my consversations in the White House very private,” Marshall said in a recent interview. “But I’ll tell you this, the president is very concerned about keeping the Senate majority.”

Kobach insists his two successful campaigns for secretary of state show that he can win a statewide general election.

Kobach’s connection to Trump benefitted him in previous races. It was the president’s last-minute Twitter endorsement that many believe helped him narrowly defeat sitting Gov. Jeff Colyer in the 2018 gubernatorial primary.

Kobach would like history to repeat, but he doesn’t sound confident when asked if he expects to have the president’s backing.

“Obviously it’s always a great advantage to have the president’s endorsement, but I’m not going to try to predict whether he’ll get involved,” Kobach said.

The concerns raised about his candidacy, he said, come from “establishment” Republicans who fear he’ll be too independent.

“Some of the moderate establishment is uncomfortable with a strong conservative in the Senate seat,” he said. “They would rather have somebody who can be forced to compromise, somebody who doesn’t hold firm on issues.”

Kobach is a polarizing figure. The same hardline positions on immigration and ballot security that endear him to his conservative base alienate moderates and independents.

Marshall has the opposite problem. Despite a voting record that he said aligns with President Trump “98% of the time,” some conservatives remain skeptical of him.

The national conservative-leaning Club for Growth spent about $400,000 to help Huelskamp. Some of that money paid for a TV ad calling Marshall “a liberal backed by political insiders.”

The group is now working to deny Marshall the U.S. Senate nomination. The Club for Growth recently spent more than $30,000 to place full-page ads in several newspapers that featured anonymous complaints from what it claimed were some of Marshall’s former patients.

Eric Phals, Marshall’s campaign manager, called the ad “garbage” from a “dark money group out of the D.C. swamp.”

Some big-name Kansas Republicans are endorsing Marshall in an attempt to head off a Kobach nomination. They include former Senator and 1996 presidential nominee Bob Dole and Colyer, the former governor defeated by Kobach in the 2018 primary.

“He (Marshall) is a candidate that I’m certain Republicans and all Kansans can get behind for the general election,” Colyer said in endorsing Marshall at a recent news conference in Topeka.

Kansas Democrats believe a Kobach win in the August primary would boost their chances in November.

That’s not entirely wishful thinking, said Michael Smith, an Emporia State University political scientist. He said if Kobach is the Republican nominee, the Senate race could play out much like the 2018 contest for governor.

“A Democratic woman stressing moderate themes, health care and good government defeating Kobach in the general election, it happened in 2018 and it could happen again,” Smith wrote in a recent column for Kansas outlets.

Bollier, the likely nominee and a retired doctor, who switched parties last year. Touting her moderate credentials and “ability to bridge partisan differences,” she raised more than $1 million during her first three months on the campaign trail.

The people donating to her campaign, Bollier said, “want to see a change in the kind of leadership they have representing them in Washington.”

Jim McLean is the senior correspondent for the Kansas News Service is a collaboration of KCUR, Kansas Public Radio, KMUW and High Plains Public Radio focused on health, the social determinants of health and their connection to public policy. You can reach him on Twitter @jmcleanks or email [email protected]