The Hutchinson Community College softball team announced Wednesday that the Cowtown Classic in Fort Worth, Texas, has been canceled because of rain and field conditions.

Head coach Jaime Rose announced on Wednesday that instead of the Cowtown Classic and its scheduled five game, the Blue Dragons will still travel south to play a pair of doubleheaders.

Hutchinson will play North Central Texas on Friday at Noon and 2 in Gainesville, Texas.

The Blue Dragons will then play Murray State in a doubleheader at Noon and 2 in Tishomingo, Oklahoma. 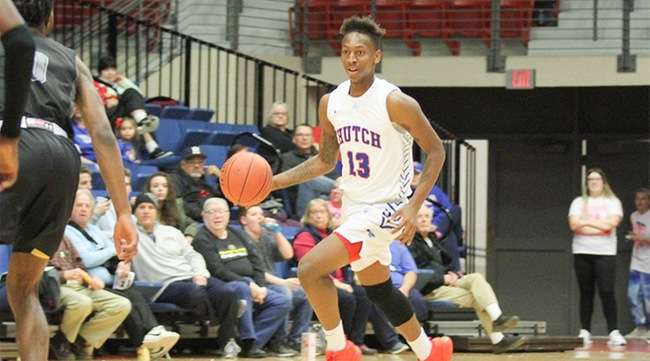 Leading by three points at halftime, Hutchinson had runs of 20-6 and 9-1 to earn a 71-64 victory at Dodge City, improving the Blue Dragons' road record to 4-5.

Hutchinson, now 20-7, reached the 20-win plateau for the 14th consecutive season and for the 53rd time in program history. The Blue Dragons remain tied for third place with Pratt, which won at Garden City on Wednesday night. Dodge City falls to 9-18 overall, 1-17 in the Jayhawk West.

The Blue Dragons led Dodge City 32-29 at halftime. Dodge City, which trailed by 14 points in the first half, tied the game at 34-all on a Quindarus Thomas bucket with 17:25 to play in the second half.

That's where Hutchinson started its first key second-half run. After Dodge City missed a couple of point-blank tip-in opportunities, Saquan Singleton scored in transition to give Hutch back the lead it wouldn't surrender again. When Majok Kuath dunked on a give-and-go with Frankyn Batista with 10:36 remaining in the second half, the Dragons completed a 20-6 run and led 54-40.

The Conquistadors then scored nine unanswered points to close within 54-49 after a Deatrick Pashell three-point play with 6:57 remaining.

The Blue Dragons responded to that challenge with a 9-1 run. When Singleton scored with 3:09 remaining, Hutchinson rebuilt a double-figure lead at 63-51. Dodge City got back within five twice in the final minute, but D.J. Mitchell and King were 4 of 4 from the free-throw line in the final 30 seconds to clinch the victory.

Josh Baker led the Blue Dragons with 21 points, five rebounds and two assists. Baker hit 3 of 6 3-pointers in the game.

King continued his strong play of late with 14 points. Singleton, Mitchell and Tyler Brown had eight points each.

Mason Senigaur had 13 points and eight rebounds to lead Dodge City. Keldrick Hayes had 11 and Landyn Tyler finished with 10 points.

The Blue Dragons got off to a great start in the first 5 1/2 minutes of the game in building a 20-6 lead with 14:38 to play in the opening half. The Dragons then went scoreless for 7 minutes, 34 seconds. Dodge City closed within 20-17. Baker's 3-pointer with 7:04 to play in the half snapped the scoring drought.

The Blue Dragons will play host to first-place Colby at 7:30 p.m. on Saturday at the Sports Arena for Pink-Out night.

GAME NOTES – The Blue Dragons complete a season sweep of Dodge City and now lead the all-time series 121-64, 51-32 in Dodge City. … This was all-time win No. 1,826. … With four assists, Saquan Singleton moved into a tie for seventh place on the Blue Dragon career assist list with Shakur Juiston at 259 assists. … The Blue Dragons are 4-6 when getting out-rebounded. … This was Hutchinson's 10th game this season to limit an opponent to less than 70 points. … This was Josh Baker's seventh 20-point game of the season. … Hutchinson had its 15th game of 50 percent or better shooting.