KANSAS CITY, Mo. (AP) — Items from what became known as “The Pine Tar Game" between the Royals and Yankees will be sold by Heritage Auctions later this month. The highlight will be the jersey worn by George Brett that is expected to fetch more than $100,000. The bat, which now resides at the National Baseball Hall of Fame and Museum in Cooperstown, New York.

UNDATED (AP) — Baylor remains atop The Associated Press men's college basketball poll in a week that saw preseason No. 1 Michigan State fall out. The Bears received 48 of 64 first-place votes from a media panel to stay at No. 1 for the fourth straight week. No. 2 Gonzaga had 15 first-place votes and No. 3 Kansas got one. San Diego State and Louisville rounded out the top five. Seton Hall was the only change among the top 10 after moving up two spots to No. 10. Michigan State dropped out of the rankings from No. 16 following a three-game losing streak.

AMES, Iowa (AP) — Iowa State will finish the basketball season without star guard Tyrese Haliburton. Coach Steve Prohm says Haliburton fractured his left wrist in the Cyclones' win over Kansas State on Saturday. Haliburton was the team's second-leading scorer and the Big 12 leader in assists and steals. The sophomore is considered a potential lottery pick in the NBA draft this year. Haliburton was hurt as he blocked a shot late in the first half.

LUBBOCK, Texas (AP) — Texas Tech got back into the Top 25 and had a big victory. Davide Moretti and Jahmi'us Ramsey each had 17 points as the No. 24 Red Raiders beat turnover-plagued TCU 88-42 on Monday night. It was their biggest margin of victory ever in a Big 12 game. Five players scored in double figures and Texas Tech made a season-high 13 3-pointers while shooting 60 percent overall. TCU had six turnovers in less than 3 1/2 minutes to start the game and fell behind 11-2. The only player in double figures for the Frogs was Jaire Grayer with 10 pointers.

WASHINGTON (AP) — The NCAA is stepping up its lobbying efforts as Congress considers allowing endorsement money for college athletes. Federal disclosure forms reviewed by The Associated Press show the NCAA and its allies spent at least $750,000 to lobby Congress last year. The NCAA has said it will allow athletes to “benefit from the use of their name, image and likeness," but only with restrictions. It argues that letting players sign unlimited endorsement deals could corrupt recruiting and destroy competitive balance. Advocates for greater freedoms for players say they're concerned the deep-pocketed NCAA has too much influence in Washington.

COSTA MESA, Calif. (AP) — The Los Angeles Chargers say Philip Rivers will enter free agency and not return for the upcoming season, ending his 16-year run with the franchise. The fourth player taken in the 2004 NFL draft owns 30 franchise records and has thrown for over 4,000 yards in 11 of his last 12 seasons. Rivers has completed 64.7% of his passes for 59,271 yards, 397 touchdowns and 198 interceptions.

PHOENIX (AP) — The Arizona Diamondbacks have avoided salary arbitration with Nick Ahmed by working out a four-year, $32.5 million contract with the two-time Gold Glove shortstop. Ahmed hit a career-high .254 last season with 19 homers and 82 RBIs in 158 games. He won his Gold Gloves in each of the past two seasons.

ANAHEIM, Calif. (AP) — Los Angeles Angels general manager Billy Eppler has confirmed he won't be making a widely reported trade with the Dodgers, although he didn't specify the deal or the players involved. Multiple media outlets reported the Angels nearly acquired Dodgers outfielder Joc Pederson and right-hander Ross Stripling last week in a deal that would have sent infielder Luis Rengifo to the Dodgers. The deal apparently fell apart as a side effect of the Dodgers' lengthy attempts to get outfielder Mookie Betts from the Boston Red Sox in a blockbuster trade. 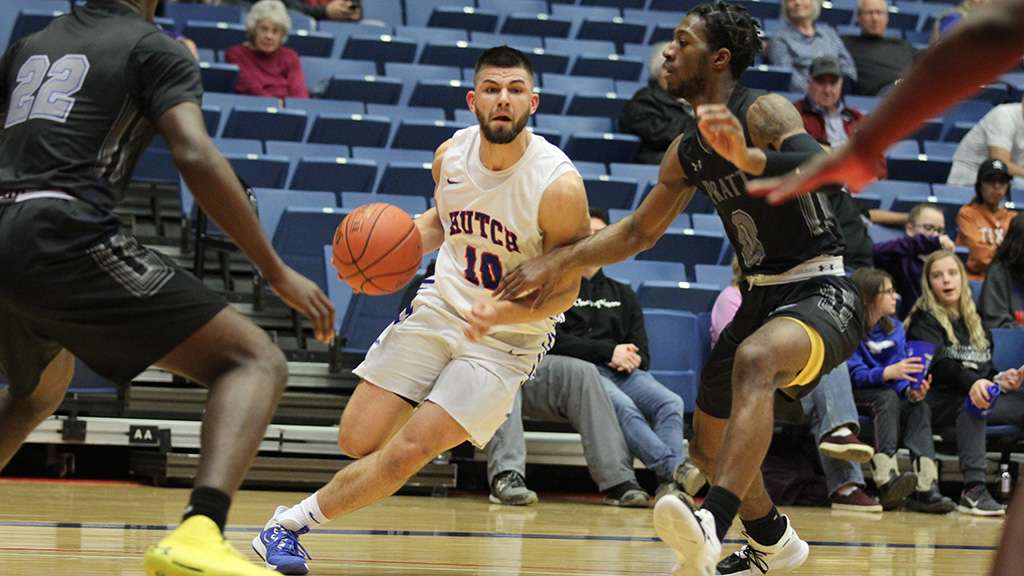 The Hutchinson Community College men's basketball team won consecutive games for the first time in 26 days and moved into a tie for third place in the Jayhawk West on Monday night at the Sports Arena.

Sophomore Tyler Brown scored a game-high 23 points to pace the Blue Dragons to a key 75-51 Jayhawk West victory over the Pratt Beavers. Hutchinson and Pratt split the season series.

The victory moves Hutchinson, 19-7 overall, into a tie for third place with Pratt with four games remaining in the regular season at 10-7. Seward County also won Monday to remain two games behind both the Blue Dragons and Beavers. Pratt falls to 16-10 overall. The Blue Dragons travel to Dodge City for a 7:30 p.m. tipoff Wednesday.

Brown knocked down 5 of 8 3-point goals to spark the Blue Dragons. Brown had two 3-pointers and one three-point play in an early 15-6 run that helped Hutchinson to an early 23-9 lead with 9:24 remaining in the first half.

The Blue Dragon guard from Derby surpassed the career 500-point plateau by hitting 8 of 12 shots overall and going 2 of 2 from the free-throw line. He added five rebounds and four assists.

Three other Blue Dragons scored in double figures on Monday.

Jamel Horton led the Beavers with 23 points, hitting 4 of 6 from distance. Tommy Thomas as the only other Pratt player in double figures with 10 points.

Pratt scored the first points of the game, but went scoreless for the next 4:52 as Hutch scored eight unanswered to go up 8-2 on a Saquan Singleton dunk with 14:58 to play. Thomas made it 8-4 with a bucket for Pratt with 14:06 remaining. That's when Brown took over for the Blue Dragons.

Despite shooting only 39 percent in the first half, the Blue Dragons led 39-24 at halftime.

GAME NOTES – The Blue Dragons now own a 147-25 all-time record against Pratt, including 68-11 in games in Hutchinson. … This was all-time win No. 1,825. … The 27 points scored by Pratt in the second half was an opponent low for a second half this season against the Blue Dragons. … D.J. Mitchell surpassed the career 800-point mark (805).