ENID, Okla. – For the first time in Hutchinson Community College baseball history, the Blue Dragons have back-to-back shutouts in the first two games of a season.

Dawson Linder twirled a one-hit shutout in Game 1 on Saturday in a 10-0 Blue Dragon win over Northern Oklahoma-Enid on Saturday afternoon. Then Brian Skillman and Zach Firmature followed with a combined four-hit shutout in a 1-0 Hutchinson win.

NOC-Enid is the defending NJCAA Division I national champion.

The Blue Dragons win their season opener for the third-straight season. The 2-0 Blue Dragons will now compete at the UCO Festival next weekend in Edmond, Oklahoma. Hutchinson will face Crowner and Redlands on Friday and NEO on Saturday.

GAME 1 RECAPLinder (1-0) allowed just four NOC-Enid baserunners in the game – two walks, one hit batter and a Cale Salvage single in the fourth inning of the five-inning rule-rule contest.

Linder plunked Kade Hitt to open the bottom of the third. Hitt advanced to third, but was stranded. Linder then allowed a single and walk in the fourth, but coaxed an easy flyout to end the inning. Leading 10-0 in the bottom of the fifth, Linder worked a 1-2-3 inning to earn his third career victory.

Linder needed 68 pitches to toss his first career complete game and shutout. He had five strikeouts in the performance.

The Blue Dragons post a shutout in a season opener for the first time since 2014 when Kyle Simonds and Austin Harms combined for a shutout in an 8-0 victory over Rose State.

Hutchinson's offense finally got going the second time through the batting order.

Freshman Luke Sartori scored the first run of the 2020 season for the Blue Dragons when he led off the fourth with a solo home run to left field. That ignited a six-run fourth inning for Hutchinson.

An RBI single by Cade Argo made it 2-0. Britton Mulhurn made it 4-0 with a two-run single and Mason Lowe added a two-run triple to account for the four runs in the inning.

Hutchinson added on four more runs in the top of the fifth to make it 10-0. Christopher Noble, Will Reetz and Jenner Steele all had RBI doubles in the inning.

Eight Blue Dragon starters has at least one hit and seven Dragons drove in runs. Mulhurn had the only multi-hit game for Hutchinson, going 2 for 3 with two RBIs. The Blue Dragons had eight hits in the game.

GAME 2 RECAPSkillman worked the first three innings in the second dame. He allowed just two hits and struck out five with no walks.

Firmature took over in the fourth with the game still scoreless. Firmature delivers four strong innings out of the bullpen with only two hits and one walk allowed and four strikeouts to earn the pitching victory.

Enid had a threat working in the bottom of the fifth with Hutchinson trailing 1-0. The first two Jets batters reached on a base hit and walk. Noble made a diving catch in foul territory off the bat of Logan Rutledge just behind the first-base bag for the first out. Firmature then coaxed a 4-6-3 inning-ending double play out of Gage Ninness to end the inning.

From that point, Firmature allowed just one hit over the final two innings to earn the victory.

Out-hit 4-3 in the second game, Hutchinson's lone run came in the top of the fourth inning. Sartori singled with one out and moved to second on an Austin Callahan groundout. Drew Reetz then doubled home Sartori for a 1-0 lead.

The Blue Dragons loaded the bases with no outs in the seventh, but came up empty. 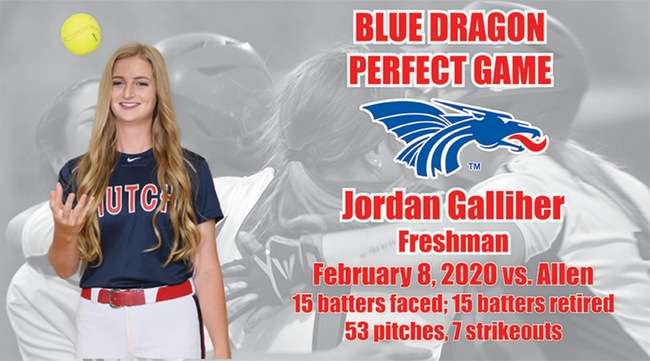