HUTCHINSON, Kan - The Hutchinson Community College men's basketball team shot better than 50 percent in a game for the 14th time this season and earned a crucial Jayhawk West victory on Saturday afternoon.

The Blue Dragons play host to Pratt at 7:30 p.m. on Monday at the Sports Arena.

Freshman Clarence King came off the bench to spark the Blue Dragons and score a career-high 16 points on 6 of 7 shooting in 19 minutes. King also had four rebounds, four assists and two steals.

Freshman Majok Kuath had 13 points on 5 of 6 shooting with five rebounds and three steals.

The Blue Dragons shot 55.2 percent for the game (20 of 34) from the field. Hutch had a season-low one 3-point goal on just nine attempts and hit 17 of 29 from the free-throw line. The Dragons owned a 41-31 rebounding advantage and dished out 16 assists.

Garden City's Tahlik Chavez, the Jayhawk Conference's leading scorer, became the third opponent to score 30 points against the Blue Dragons, going for 31 points on 9 of 18 shooting with 6 of 13 from 3-poin range. Those six treys tie an individual opponent high against the Dragons this season.

Garden City outscored Hutchinson 45-36 in the second half. The closest Garden City got was 12 points at 62-50 with 8:32 remaining in the period.

The Blue Dragons overcame the 24-point Garden City advantage on 3-pointers by outscoring the Busters 56-20 in the paint.

GAME NOTES – The Blue Dragons are now 137-49 all-time against Garden City, including 74-10 in games played in Hutchinson. … This was all-time win No. 1,824. … The Blue Dragons held an opponent to less than 40 percent shooting for the 16th time this season. … 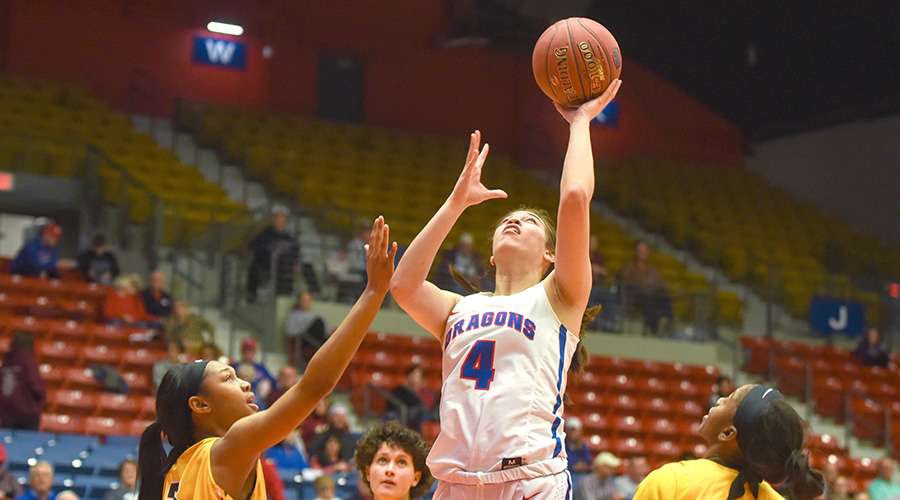 The Blue Dragons hit 12 of their first 17 shot attempts and rolled to a 103-61 victory over the Broncbusters for Hutchinson's ninth-consecutive victory.

The Blue Dragons improve to 23-2 overall and take over sole possession of first place in the Jayhawk West with a 16-1 record. Seward County was upset at Pratt on Saturday. Pratt comes to the Sports Arena on Monday at 5:30 p.m.

Betham knocked down a career-high 12 field goals on 15 attempts to lead the Blue Dragons, who shot 58.7 percent for the game. Vannett nailed 5 of 11 from 3-point range as the Dragons rung up 9 of 19 from distance as a team.

That inside-outside punch combined for 23 points – Vannett had 14 and Betham 9 in the first quarter. The Blue Dragons shot 70 percent in the opening 10 minutes to build a 31-16 lead after one period. That lead grew to 54-27 by halftime. Hutchinson's largest lead of the game was 42 points.

With the exception of 18 turnovers that led to 17 Garden City points, the Blue Dragons were dominant. Hutchinson outrebounded Garden City 56-30, getting a season-high 10 rebounds from Gelecia Cooper. The Blue Dragons had a conference-season high 26 assists with nine steals and five blocked shots.

Four players scored in double figures for the Blue Dragons. Abby Ogle was 7 of 9 from the field to finish with 14 points and eight rebounds. Ogle also had three assists. Sophomore Lauryn Mapusua had 10 points, five rebounds and three assists.

The Blue Dragons were 44 of 75 shooting overall, but only 6 of 16 from the free-throw line.

Ariyanna Hall had a second-straight big game against Hutchinson with 20 points and a pair of 3-poiners to lead Garden City. Alyssa Boyce had 14 points and Donetria McGee added 10.

The victory was head coach John Ontjes' 200th win at the Sports Arena.

GAME NOTES – The Blue Dragons collect all-time win No. 999 in team history. … The Dragons are now 72-19 all-time against Garden City, including 39-5 at the Sports Arena. … Abby Ogle ties Alysse Barlow for ninth on the single-season steals list with 97. … Makayla Vannett jumps two spots to No. 9 on the single-season 3-point list with 79. … This was the fourth time this season to break 100 points for Hutchinson, the first since Cloud County on December 11. … This was Hutch's sixth game of shooting better than 50 percent and 11th time to never trail in a game. … Vannett tied a career high with nine total field goals in a game. … This was Vannett's seventh career game of five or more 3-pointers. She now has 173 for her career, third most in Blue Dragon history.