WSU's Echenique Plays For His Country

WICHITA, Kan. - Wichita State center Jaime Echenique is a busy senior, what with playing the best basketball of his career and shepherding sophomores and freshmen toward the NCAA Tournament.

He always has time to represent his home, however, and the artwork on his Under Armour shoes is the latest example. Echenique used acrylics to paint Colombia's flag on the back of his all-white shoes.

"They gave us them before practice and I was like 'I want to do something with these shoes,'" he said. "I took (art) classes in high school and I knew I could do it."

"People from back home love it," he said. "I want to be proud of where I'm coming from and I want to show my people I never forget. All the people who support me and are sticking up for me."

Echenique's game will again take the spotlight during Sunday's game at No. 25 Houston. The January game against the Cougars provided a harsh example of what he means to the Shockers. Foul trouble limited him to 14 minutes in that 65-54 loss and deprived the Shockers of a matchup problem they needed to dent the defense. He scored eight points and grabbed six rebounds in those limited minutes.

Echenique has played 27 or more minutes in six of his past seven games. He averages 14.8 points and 5.7 rebounds during that stretch, shooting 52.4 percent from the field.

Those are not the numbers that Echenique cares about.

"This is my last year and my last chance," he said. "I've never gone to an NCAA Tournament, but I want to go. I want to enjoy the experience. We went to the NIT last year, but it wasn't the right tournament for us."

The Shockers worked their way out of an offensive slump in Thursday's 80-79 loss to Cincinnati. Turning that performance into any kind of a hot streak won't be easy.

Wichita State shot 48.5 percent from the field against the Bearcats, its best in American Athletic Conference play. Its 36.4-percent accuracy from three-point range ranks second in conference games.

According to Pomeroy's statistics, Wichita State played its third most efficient offensive game of the season, scoring 1.15 points per possession. The Shockers are 44-3 since the 2016-17 season in games in which it scores at that clip or better, according to kenpom.com.

Echenique played 31 good minutes and scored 19 points. Forward Dexter Dennis rebounded from a poor shooting night at Tulsa to make 4 of 6 three-pointers. The Shockers committed 10 turnovers in a high-scoring game.

"For a good amount of games down the stretch, we haven't been able to put the ball in the basket," guard Jamarius Burton said. "(Thursday) we were able to do so. We've got to get back to our calling card, which is defense and that has kept us in games. Hopefully, we can pair the offense and defense next game."

Houston will put Wichita State's scoring to another test. The Cougars held the Shockers to 30.4 percent shooting in the first meeting. Houston blocked nine shots and limited the Shockers to six second-chance points and three on fast breaks. That means the Shockers got very few easy baskets and had to work against Houston's set defense far too often.

Houston doubled Echenique and owns the rare set of defenders who could harass him and recover to bother shooters. The Cougars took Wichita State's guards – especially Erik Stevenson – out of the game with their defense.

After that game, the Shockers talked about selfishness and a lack of execution on offense. They improved their passing and execution, but little comes easy on offense.

This is more of the same in the American. Sunday's game pits Wichita State against a defense ranked in Pomeroy's top 75 for efficiency for the ninth straight time. Thursday's game at UCF will make it 10 in a row.

The Shockers held the Cougars to eight offensive rebounds and eight second-chance points in the January meeting. Wichita State would love to match that effort on Sunday.

Guard Quentin Grimes returned to the starting lineup in Thursday's 75-62 win over Tulane and scored 15 points and handed out five assists. Freshman guard Caleb Mills came off the bench to make 4 of 7 three-pointers and score 18 points. Mills, who played 12 minutes and scored five points against the Shockers, averaged 14.8 points in the five games since and is 12 of 24 from three-point range. 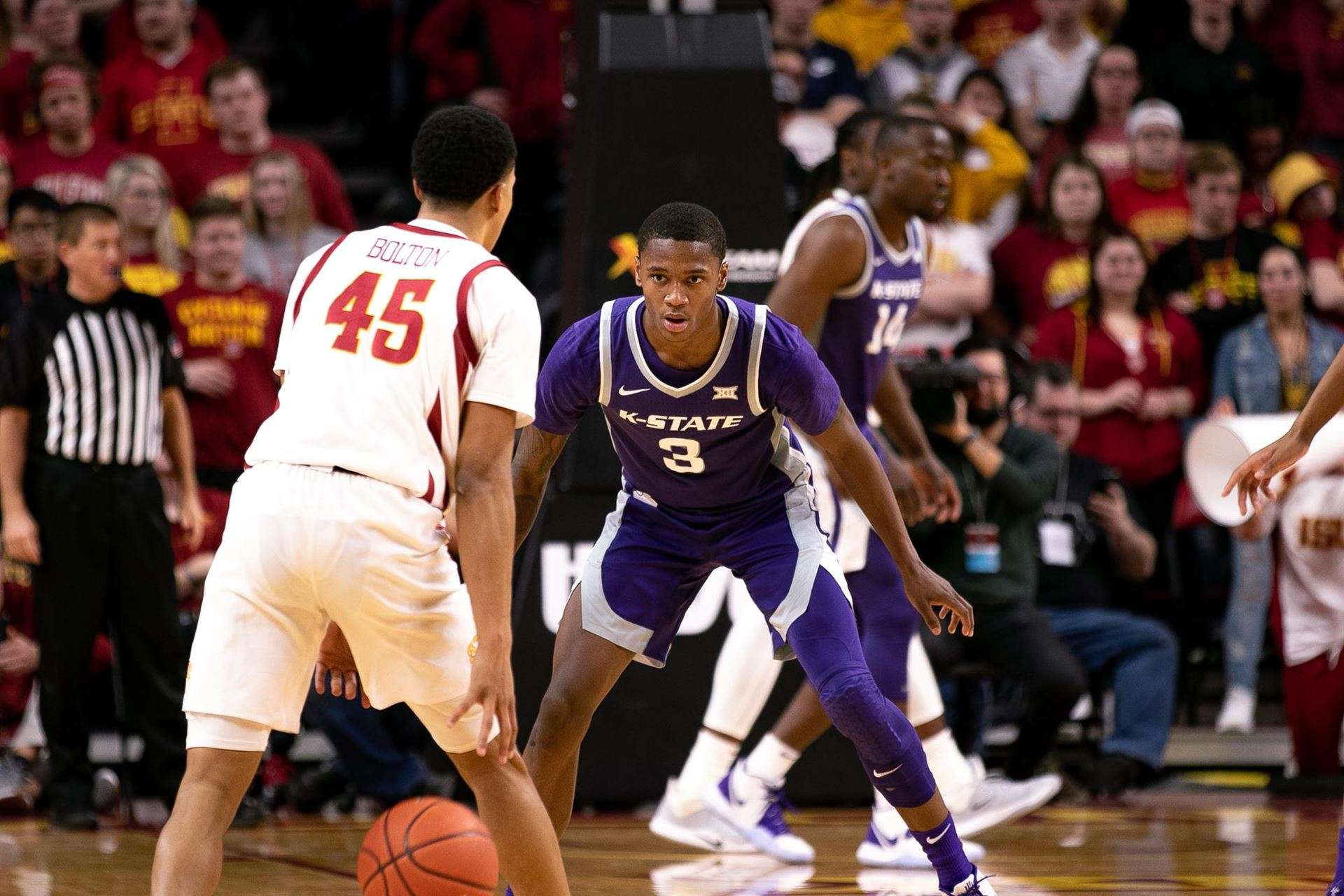 AMES, Iowa – Iowa State jumped out to a 21-2 lead and withstood several comeback attempts by Kansas State in the second half to post a 73-63 on Saturday night before 14,149 fans at Hilton Coliseum.

Down by as many as 21 points in the first half, K-State rallied to within 4 points on two occasions down the stretch, including 52-48 after layup by junior David Sloan that forced an Iowa State timeout with 7:54 to play. However, the Cyclones, playing in front of a near sellout crowd, responded by scoring 7 of the next 10 points, including back-to-back buckets by senior Prentiss Nixon out of the timeout, to push the lead to 59-51 with just under 4 minutes remaining and were never seriously threatened the rest of the way.

Junior Cartier Diarra, who was inserted into the starting lineup for the first time in 4 games, provided a spark for the Wildcats with a game-high 24 points – just one shy of his career-high – on 7-of-15 field goals, including 5-of-11 from 3-point range, to go with 3 assists and a career-best 3 blocks in 37 minutes. It marked Diarra's fifth 20-point game of his career, which have all come this season.

Diarra was joined in double figures by freshman DaJuan Gordon, who collected his fifth double-digit scoring game of the season and his second in Big 12 play with 10 points. Senior Xavier Sneed, who struggled with a hip injury for most of the game, saw his streak of double-digit scoring game end at 7 after posting just 8 points, but he did lead the Wildcats with 7 rebounds and 3 steals in his 32 minutes of action.

The Iowa State offense was balanced with 5 players scoring at least 9 points, as junior Solomon Young led the way with 20 points on 7-of-9 field goals and 6-of-7 free throws. Sophomores Rasir Bolton and Terrence Lewis scored 13 and 12 points, respectively, while sophomore Tyrese Haliburton and senior Prentiss Nixon added 9 points each. The Cyclones connected on 45.3 percent (22-of-58) from the field, including 54.5 percent (12-of-22) in the second half, and were a near perfect 19 of 20 from the free throw line.

The teams capitalized on turnovers, as they combined for 44 points off 33 turnovers on the night. The Wildcats scored 23 points off 17 Cyclone turnovers, which marked the 10th time this season with 20 or more points off turnovers.

K-State was once again hampered by a poor start to the game, as Iowa State jumped out to an 11-2 lead, which included 8 points from junior Solomon Young, that forced head coach Bruce Weber to call his first timeout at the 16:00 mark. The Wildcats' start included 4 missed field goals and 3 turnovers.

The timeout didn't do much to halt the Cyclones' momentum, as they rattled off 8 more points in a row, capped by a 3-pointer by sophomore Tyrese Haliburton, that forced Weber to call a second timeout at the 13:18 mark.

The deficit grew to 21-2 after layup by sophomore George Conditt VI before junior Cartier Diarra gave the Wildcats' their first field goal – a 3-pointer from the left corner – with 12:04 before halftime.

ISU continued to flex its offensive muscle, scoring 12 of the next 20 points, which included 2 more 3-pointers from Haliburton, that extended the lead to 33-13 at the 7:07 mark.

After 4 free throws by the Cyclones extended the lead to 37-16 with under 6 to play before halftime, the Wildcats finally got some offensive going with a jumper by junior Levi Stockard III that ignited a 12-0 run to end the half. During the run, Diarra accounted for 6 points, including his third triple of the half, while freshman DaJuan Gordon finished off the half with 2 free throws and a layup to close the deficit to 37-28.

K-State had its opportunities early in the second half, but it was ISU that grabbed the momentum, scoring 6 of first 9 points to take a 43-31 at the 17:29 mark. Jumpers by senior Makol Mawien and Diarra cut the deficit to 43-35, but the Cyclones responded with 6 in a row to push back ahead at 49-35.

The ever-resilient Wildcats continued to show fight, as a 10-0 spurt, which was started by a 3-pointer by Diarra, that again allowed the team to get within single digits at 49-45 with just over 10 minutes to play. However, the Cyclones ended the run with a 3-pointer from senior Prentiss Nixon to push it back out 52-45 with 9:44 to play.

A Diarra free throw and a jumper by junior David Sloan once again got K-State to within 52-48, which forced Iowa State head coach Steve Prohm to use a timeout at the 7:54 mark. The timeout proved to exactly what the Cyclones needed as they scored 5 row, as Nixon scored on back-to-back jumpers to go with Young free throw -- all part of a 7-3 spurt -- to push it back to 59-51 and forced Weber to call a timeout with 3:45 remaining.

Twice more the Wildcats closed to within 7 points, including 64-57 on a pair of free throws by Gordon with 1:50 to play, but the Cyclones responded with 5 straight points to push the lead back into double figures at 69-57. Back-to-back 3-pointers by Diarra and junior Mike McGuirl finished off the K-State scoring.

Diarra led all scorers with 10 points on 3-of-6 shooting in the second half.

PLAYER(S) OF THE GAME

Junior Cartier Diarra scored a game-high 24 points on 7-of-15 field goals, including 5-of-11 from 3-point range, to go with 3 assists and a career-high 3 blocks in 37 minutes of action.

STAT OF THE GAME

"If this was a heavy weight fight, it was a knockout in the first round. The first thing I told our guys tonight was about being the more determined team. We both have the same record and obviously they are a very good team at home. We told them that Solomon Young had been playing well the last few weeks and that they are going to go to him early. Determination was going to be important as well as transition defense and post defense. However, we turned it over and they got some transition then we missed some shots and they just put it to us. We spotted them the big lead and to our guys credited they keep fighting, they keep battling and we cut it to 9 at the half. We had 11 straight shutouts to end the half. In the second half, we just couldn't get enough stops. They were excellent from the free throw line (19-of-20) and we turned it over way too much. You can't turn it over 16 times and expect to win on the road."

K-State returns to action on Tuesday night, as the Wildcats play host to Oklahoma State (11-12, 1-9 Big 12) at 8 p.m., CT on ESPNU. It will be the first meeting between the schools this season.