ARKANSAS CITY – Freshman Majok Kuath had another huge game, but the Hutchinson Community College Men's Basketball Team came up just short against the Cowley Tigers in an NJCAA Top 20 matchup on Saturday at Scott Auditorium.

Leading by one point after a Kuath three-point play with 30.8 seconds to play, Cowley answered with a Shemarri Allen layup with 14.8 seconds to go to regain a one-point lead. The No. 12-ranked Blue Dragons weren't able to answer that challenge and fell to the No. 20 Tigers 84-83.

Kuath posted his second double-double of the season with career highs of 34 points and 15 rebounds to lead the Blue Dragons. Kuath is the first Blue Dragon to score 30 points in a game since James Rojas against Coffeyville in the 2019 Region VI Tournament semifinals.

Kuath had a huge second half, scoring 25 points on 9 of 11 shooting and going 7 of 7 from the free throw line and grabbing 10 rebounds in the final 20 minutes. For different times in the final 8 minutes of the game, Kuath scored to either give the lead or tie the game.

Trailing 82-80, Kuath took a lob from Tyler Brown on an inbound play to score and he was fouled. With 30.8 seconds left to play. Kuath's free throw gave Hutchinson an 83-82 lead.

Cowley regained the lead on Allen's layup with 14.8 seconds left. The Blue Dragons came up empty on its final possession.

The Tigers had nine 3-pointers and were 11 of 13 from the free-throw line with 21 turnovers.

Saquan Singleton finished with 17 points on 8 of 14 shooting with six rebounds and five assists for Hutchinson. Josh Baker hit three 3-pointers to close with 13 points. Tyler Brown was next with eight points, adding five assists and a career-high five steals.

Dalen Ridgnal posted a double-double with 23 points and 13 rebounds. Allen finished with 13 points, while Mike'l Henderson and Cevin Clark had 10 points each.

Cowley led 66-61 when the Dragons scored six unanswered with a Kuath putback, two Clarence King free throws and Kuath dunk with 7:30 to play for a 67-66 lead. The lead changed hands five more times in the final 7:30 of the game. 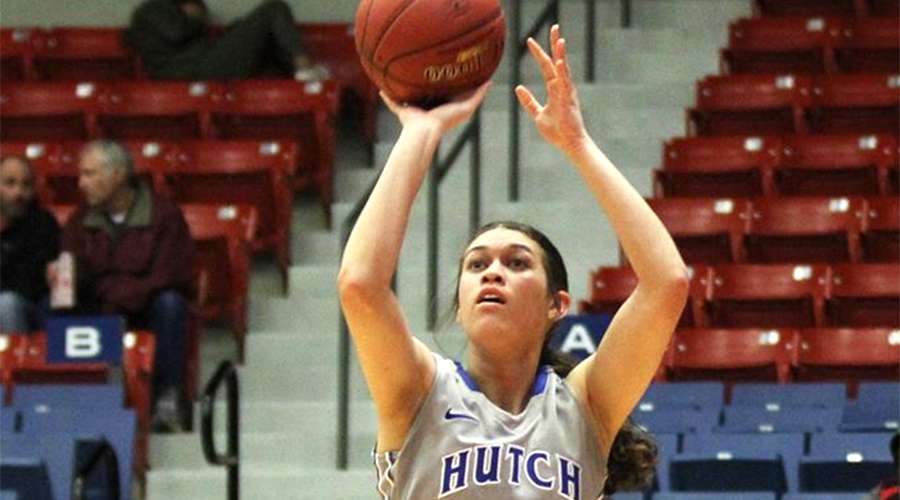 Unfortunately for the No. 4-ranked Blue Dragons, there was one more lead change to occur.

Shontrice Austin’s 27-foot 3-pointer at the buzzer gave the Tigers a 72-70 victory over Hutchinson on Saturday night at Scott Auditorium.

The Tigers shot right at 50 percent (26 of 52). Cowley shot 69.2 percent in the first quarter and 60.7 percent overall in the first half in scoring an opponent-high 40 points in the opening half.

The Blue Dragons were 6 of 20 from 3-point range and 12 of 15 from the free-throw line. Hutchinson was out-rebounded 32-28, but had conference season-low 14 turnovers.

Austin had 13 of her game-high 19 points in the first half to lead Cowley. Austin also had an opponent-high nine assists as well as the game-winning shot. Seanna Boltz nailed four 3-pointers and finished with 14 points. Marlnee is the second opponent to post a double-double against the Blue Dragons with 13 points and 10 rebounds.

The Tigers hit 8 of 22 from 3-point range and 12 of 18 from the free-throw line. The Tigers had a Hutchinson opponent-high 18 assists.

The Blue Dragons will play third game of a stretch of five games in 11 days at 5:30 p.m. on Monday against Northwest Tech top open Jayhawk West play.

GAME NOTES – Hutch has a 25-23 all-time series lead over Cowley. … Makayla Vannett’s only 3-pointer of the game tied Tessa Morrow for fifth on the Hutchinson career 3-point list (148). … Hutch’s 28 rebounds were a season low. … Hutch is 0-2 when trailing at halftime.