HUTCHINSON, Kan. - Hutchinson Community College Men's Basketball Coach Steve Eck makes his first attempt at another milestone victory on Saturday as the Blue Dragons hit the road to face the second-leading scoring team in the NJCAA.

To reach that milestone on Saturday, the Blue Dragons will have to defend against a Cowley team that is averaging 110.1 points per game. The Tigers have scored 100 or more points 14 times this season with a high of 125, which came on Wednesday in a 125-10 win at Dodge City.

The Tigers shoot 33.5 percent from 3-point range, casting nearly 38 shots from distance per game, making 12.3 treys per contest. Cowley was 11 of 43 from distance on Wednesday at Dodge City.

That offensive juggernaut will put a Blue Dragon defense that regained its form on Wednesday to a test.

Hutch held an opponent to less than 70 points for the first time in eight games and limited Kansas City to 30.5 percent in a dominant 98-67 victory on Wednesday at the Sports Arena. That effort was on the heels of a defensive season-worst 50 percent allowed to Allen in an 87-80 loss last Saturday.

Using their fifth different starting lineup, the Blue Dragons shot 54.4 percent and sank nine 3-pointers against the Blue Devils. Tyler Brown, who hit four 3-pointers, and Saquan Singleton tied for team-high scoring honors with 18 points. Majok Kuath added 16 and Frankyn Batista added 10 off the bench. The Blue Dragons had 26 assists on 37 made baskets against KCK.

Saturday's game is the second in a stretch of five games in 11 days for the Blue Dragons. Hutchinson will return home to open Jayhawk West play on Monday against Northwest Tech before closing out the run with road games against Garden City and Pratt. 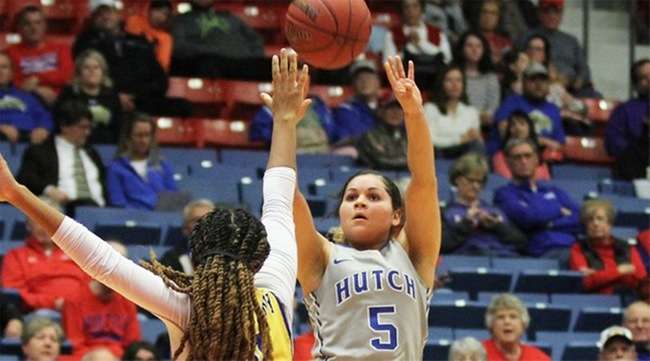 Tipoff for the final regular-season matchup against a Jayhawk East opponent is at 5:30 p.m. at Scott Auditorium in Arkansas City.

The Blue Dragons begin the season's second half on Saturday and will do so by playing the second game of a stretch of five games in 11 days.

While the Blue Dragons eventually cruised to a 77-27 win over the Bethany College JV on Wednesday, Cowley enters the contest after a 79-71 upset loss on Wednesday at Dodge City.

Hutchinson and Seward County are tied atop the Jayhawk West standings at 6-0.

Blue Dragon sophomore Abby Ogle, the reigning KJCCC and NJCAA Player of the Week, has been on a tear over her last five games. Ogle is averaging 18.8 points shooting 62.2 percent, 8.2 rebounds, 4.2 assists and 5.4 steals per game.

The Dragons take on a talented Tiger team that is tied for second in the Jayhawk East at 4-3. Cowley is 8-2 this season at Scott Auditorium.

Cowley freshman Seanna Boltz is Cowley's leading scorer at 15.0 points per game, sixth best in the KJCCC. Boltz set a Cowley single-game record with nine 3-pointers in a 31-point effort at Colby on January 4. Boltz was limited to five points on 2 of 9 shooting in the loss Wednesday at Dodge City.

The Blue Dragons have won 12 consecutive games over the Tigers dating back to 2004.

Hutchinson turns around and play host to Northwest Tech on Monday at the Sports Arena before road games to close the stretch at Garden City and Pratt next week.