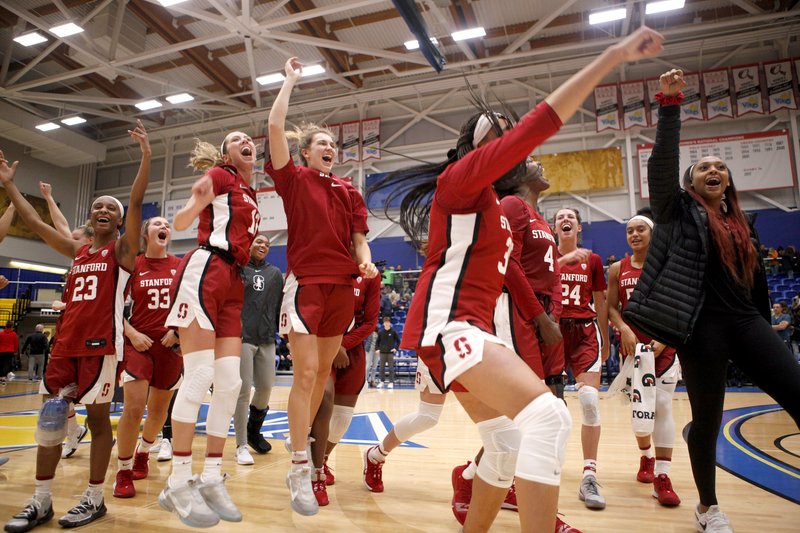 NEW YORK (AP) — Tara VanDerveer and Stanford are No. 1 for the first time in seven years.

The Cardinal moved up two spots after a weekend that saw previous No. 1 Oregon and No. 2 Baylor both lose on Saturday. It was only the third time since the Top 25 became a writers’ poll before the 1994-95 season that the top two teams lost on the same day.

Stanford received 23 of 30 first-place votes from the national media panel on Monday. The team was last No. 1 for six weeks in 2012.

“We’ve had a real good start,” VanDerveer said after beating No. 10 Mississippi State to win a tournament in Canada over the weekend. “I think, maybe, it would be a positive thing in terms of motivating our team to continue to work hard and get better. You hope that it wouldn’t have people be complacent.”

The Hall of Fame coach knows there is already “a pretty big target on (Stanford’s) back” because of its ranking and storied history.

“I don’t know that it would change much, honestly,” she said. “I just go with the flow. Whatever people vote, I just go with it. I’m just trying to focus on our team — and not the periphery stuff.”

Louisville jumped up six spots to No. 2 after knocking off Oregon, which fell to third. The Cardinals got five first-place votes. UConn, which was the only top-10 team that didn’t play over the holiday weekend, received the other two first-place votes and remained No. 4.

Oregon State moved up to No. 5. South Carolina and Baylor were Nos. 6 and 7. The Gamecocks beat the then-No. 2 Lady Bears in the Paradise Jam tournament.

Florida State, Maryland and Mississippi State rounded out the first 10 teams in the poll.

“It’s a great accomplishment being a mid-major and getting recognized in the AP poll,” first-year Missouri State coach Amaka Agugua-Hamilton said. “We had a goal of doing that, get ranked and gain more respect. We’ve got to stay there and not get complacent or satisfied.”

Michigan and LSU also were ranked, at Nos. 24 and 25. South Florida, Syracuse and West Virginia all fell out of the poll.

VanDerveer will have a few weeks to enjoy the top spot; the Cardinal are on a break for exams until facing Ohio State on Dec. 15.

Here are a few other tidbits from the poll:

MOVING ON UP: With its win over South Carolina in the Paradise Jam tournament, Indiana climbed three spots to No. 14. The Hoosiers did suffer their first loss of the year, falling to Baylor in a tight game in the same tournament. Before this season, Indiana’s best ranking was 22nd in 2014.

END OF A RUN: Syracuse had been ranked for 31 consecutive weeks before falling out on Monday. That’s the longest run in school history. The Orange’s three losses have come against Oregon, Stanford and Green Bay.