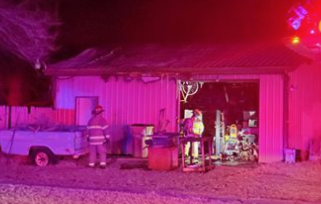 Just after 6 pm Hutchinson Fire Crews responded to 326 ½ East Park for a structure fire in a detached garage, according to a media release.

While responding units could see a working fire from a few blocks away. On scene they found a 30 x 20 shop building with heavy fire showing. Initial attack crews operated two attack lines bringing the fire under control quickly.

Heavy damage to the roof area of the garage was noted, but most of the contents were spared further damaged. Fire investigators are currently on scene investigating a cause. Crews remained n the area cleaning up and overhauling the structure. Authorities have not released details on what caused the fire.